And do not grieve the Holy Spirit of God, by whom you were sealed for the day of redemption.

In September 1982, five Chicago residents died after taking Tylenol pills that had been contaminated with cyanide.  Pharmaceutical companies responded by developing the tamper-proof seals that you find on almost all over-the-counter medications today.  These seals protect the bottles so effectively that I can barely get them open!

Seals were a standard feature of life in the first century as well, but Paul had a much different kind of seal in mind when he said that believers were sealed by God.  To understand what he meant, we must make a mental trip back to the New Testament world.

What did an ancient seal look like?  Although seals came in various shapes, the most common version was a metal cylinder engraved with a set of letters or symbols.  The owner would roll it across a piece of wet clay so it would leave an imprint.

Here’s a sample seal with its imprint. 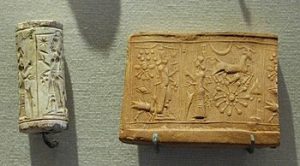 Sometimes an engraved ring would be used as a seal.  When Pharaoh appointed Joseph as administrator over Egypt, he gave him his ring as a symbol of transferring authority (Genesis 41:42).

No two seals were alike, so they worked much like a signature does today, as a way to validate a document.  Anything bearing the seal of the king had the king’s authority behind it.

The Greek word for seal is sphragis and the verb for sealing something is sphragizō. These words appear 33 times in the New Testament, most often in the book of Revelation.

What did a seal accomplish?

Seals were used to guarantee that something remained shut – the ancient version of tamper-proof packaging!

Seals were used to keep the contents of a document secure.  When a Roman made his last will and testament, he would gather six witnesses and each person would place his seal on the document.  This ensured that no one would tamper with the wording of the will.

Seals could be a form of protection, deterring anyone from harming the person sealed.

Seals can show that something is genuine or authentic.

And the apostle Paul declared that we who believe in Jesus have been sealed by God:

In Him, . . . having also believed, you were sealed in Him with the Holy Spirit of promise (Ephesians 1:13).

And do not grieve the Holy Spirit of God, by whom you were sealed for the day of redemption (Ephesians 4:30).

The Holy Spirit serves as God’s seal.  His presence in our life guarantees that nothing can tamper with God’s promises to us.  No one can change the provisions of His covenant.  And no one can deny the reality of the salvation He provides.

God has covered you with a protective seal much tighter than a Tylenol bottle.  No one can tamper with your salvation or block your entrance to God’s kingdom.  After all, your entrance pass has been signed and sealed by the King!

Investigating the first century culture helps illuminate a word like “seal.”  The more you can find out about how people made seals and used them, the better you can feel the imagery that would come naturally to someone in the Roman empire.

Ephesians 1:13-14 also mentions related terms like “the earnest of our inheritance.”  An earnest is like a down payment today, a small payment as a token of the full payment that is coming later.  A Google search on Jewish and Roman inheritance laws will give you a fuller understanding of what Paul wanted his readers to understand.

Q:  John Ortberg’s book All the Places to Go says (page 254-5)1 that the verb tenses in 1 Corinthians 15:3-5 are very significant.  Is that really as important as he says?

A:  Yes, he makes a great point.  1 Corinthians 15:3-5 is Paul’s summary of the gospel, a list of the key events of Christ’s career.  Paul uses a series of verbs in the aorist tense, describing simple past actions:

Christ was seen by Peter

Christ appeared to the Twelve, and so on.

But right in the middle of this list, he switches verb tenses to describe the Resurrection.  Instead of aorist tense, he uses the perfect tense.  A perfect tense verb describes an action which has been completed with results that continue on to the present.  In other words, he was saying, “Christ rose from the dead and He remains alive today!”  It’s a perfect way to tell the Story.

Gender stands at the center of many current controversies, and Christians need to build their opinions firmly on Scriptural teachings.  That’s why it is important to understand the Greek words for “man” – both the generic and the gender-oriented version.

1John Ortberg. All the Places to Go: How Will You Know? Tyndale House Publishers, 2015.