Poiema: Marks of the Craftsman

Poiēma: Marks of the Craftsman

For we are his workmanship, created in Christ Jesus for good works, which God prepared beforehand so that we would walk in them. 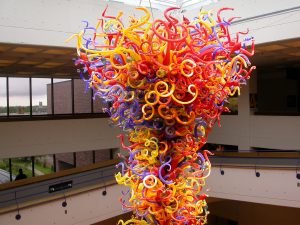 At the core of the Children’s Museum in Indianapolis is a spiraling ramp, the pathway to all four levels of exhibits.  Rising in the center is a glass-blown pillar of color that rises to the ceiling, a whirlwind of reds, yellows and blues.

It takes only a moment to realize that this is a work of art by Dale Chihuly.  Once you have seen one of his glass designs, you will recognize his touch immediately.

He is not the only one who can be recognized by his workmanship.  Art enthusiasts know the difference between a Rembrandt and a Van Gogh, just as musicians instantly realize whether an orchestra is playing Bach or Debussy.

I can even tell the difference between my wife’s handwriting and that of my granddaughter!

There is a Greek word that reminds us that this holds true for God as well.  When we look at His handiwork, we learn a great deal about Him.  The two uses of this word in the New Testament point to two products of God’s creative genius that reveal Him.

The word is poiēma (poy-AY-mah), the source of our English word poem. Its meaning, however, is much broader than merely poetry.  It springs from one of the most common words in the New Testament.  The verb poieō (579 times) means “to do, to make,” and it encompasses every imaginable kind of work.  It could involve writing a poem, preparing a banquet, making a pathway, training a disciple, forging an agreement, or reciting a prayer.

It is valuable to realize how much variety is built into the word when you shift your attention to the two New Testament passages that actually use the word poiēma.

For since the creation of the world His invisible attributes, that is, His eternal power and divine nature, have been clearly perceived, being understood by what has been made, so that they are without excuse.

Observe our world with its mountain crags and rolling waves, the elephants and bunny rabbits, the lush leaves and fluttering butterflies.  It is all a display of God’s character.  As Paul points out, it reveals that He has the power to create it all, He existed in eternity before anything else, and He exists as God on a level far above our imaginations.  Read Psalm 104 and 148 to be reminded of how each part of creation shows His greatness.

For we are his workmanship, created in Christ Jesus for good works, which God prepared beforehand so that we would walk in them.

The Lord has put together His church with the same overflowing creativity that He exhibited in creating the physical universe.  Think of the wisdom He displayed in putting together the odd combination of people who comprise your local church.  You might even suspect that He has a sense of humor!  Why else would He invent the platypus?

He crafted you with the same attention to detail.  He arranged your heredity and upbringing, shaping you through the events of your life so that you are a sample of His skill.  You are His song, His poem, His tool, His carving.

Onlookers can observe His character not only in who you are, but also in what you do.  Ephesians says that God has shaped you so that you’re ideally suited for the good works that He plans for you. When we allow Him to carry out His plans for us, it is easy to see the marks of His craftsmanship in our lives.

You might be tempted to say that Ephesians calls us God’s poem.  However, that’s not the basic meaning of the word.  Poetry is just one of the things that a person might produce.

We sometimes say that this verse calls us God’s masterpiece.  In reality, the word doesn’t always have that meaning.  A poorly designed product might reveal a sloppy craftsman.  However, we know that anything God does is a masterpiece, so “masterpiece” is not a misleading translation – not because it is the basic meaning of the word, but because God is the one doing it.

Our main word study has focused on the wild variety that God has displayed in His creation of the world, as well as in the way He has put together the church.  A little later in Ephesians, the apostle Paul uses another word that underscores the Lord’s creativity even more emphatically.  The Greek word poikilos means “varied, of various kinds.”  The Greek Old Testament uses it to describe Joseph’s coat “of many colors.”  In the New Testament, it describes the wide assortment of diseases that Jesus healed, the endless array of temptations that we face, and the constantly changing difficulties that we encounter.

In Ephesians 3:10, Paul asserts that God has created the church as a demonstration of his “manifold, varied” wisdom.  But he intensifies the idea by changing the word for “varied.”  Instead of poikilos, he says polypoikilos.  The poly means “many,” just as polygamy describes marriage with many partners.  In other words, God shows His wisdom not just in a variety of ways, but in many varied dimensions.  Like a fine diamond, His wisdom is so complex and complete that you can see new facets gleaming every time you view it from another angle.

When you pour a cup of coffee, you leave a little room at the top so you won’t spill any.  But there are some situations where you will want something to overflow.  Next week we will get acquainted with the Greek word for “overflow.”