Ochuroma: How to Demolish a Fortress

Ochurōma: How to Demolish a Fortress

For the weapons of our warfare are not of the flesh, but divinely powerful for the destruction of fortresses. 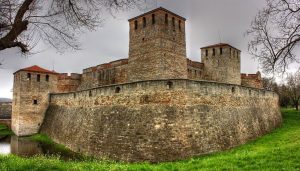 It feels as though we are living in a war zone.  Society is deeply divided, and the forces of secularism and immorality seem to be firmly nestled in the strongholds of power in government, education and the media.  The momentum seems to be flowing in the wrong direction.

The opponents of the Christian faith may seem so firmly entrenched that we are tempted to adopt the passive position that nothing can be done.

However, the apostle Paul refused to go on the defensive when he was faced with opposition in the church at Corinth.  Yes, his critics seemed unassailable when you based your assessment on human resources.  But Paul reminded his readers that Christians have access to a spiritual armory that can demolish the strongest fortresses.

What kind of fortresses was Paul attacking?  A look at the Greek word for fortress will help us see the situation more clearly.

The word for fortress is ochurōma (ah-KHU-row-mah), the name for a castle or defensive structure which could serve as a protection against attack. Ancient rulers harnessed huge teams of laborers to construct massive stone fortifications, with walls and towers rising high above the surface of the land.  Roman engineers specialized in producing impregnable defenses against attack.

All the biblical uses of the word ochurōma refer to figurative fortresses.  In the Greek Old Testament, the Septuagint, David declared that the Lord was his fortress (2 Samuel 22:2).  And Proverbs 10:29 says, “The way of the Lord is a stronghold to the blameless.”  What a wonderful picture of the security we find in God!

On the other hand, Proverbs 21:22 shows that human defenses are vulnerable: “A wise man scales the city of the mighty and brings down the stronghold in which they trust.”

Paul made a similar claim in the only New Testament use of the word:  “For the weapons of our warfare are not of the flesh, but divinely powerful for the destruction of fortresses” (2 Corinthians 10:4).

Paul wasn’t interested in bringing down literal fortresses, so we want to know, “What fortresses did he face?”

The answer lies in the context.  1 Corinthians 10-13 show that the church had been infiltrated by a group of teachers who claimed that they, not Paul, represented true Christianity.  They had made considerable headway and seemed to have the advantage.  But Paul refuses to surrender.

Instead, he uses the imagery of siege warfare to declare war on these false apostles.  First, he would break down the walls of their fortress.  Second, he would take every subject captive.  And third, once the citizens submitted, he would punish those who persisted in rebellion (verses 5-6).

Strong language!  But the threat to the church was real.  These verses list the materials used to build this fortress:

Paul’s opponents thought that they had constructed a case against him that would hold firm, but Paul could harness the truth from God to knock down those walls.

People today have constructed an assortment of intellectual arguments as a wall to stave off the truth of the gospel, rationalizing their opposition to Christ.  But we have the Word of God, which is powerful enough to demolish defenses (Hebrews 4:12).  And the Holy Spirit can slice through the walls of a heart to convict a person of truth (John 16:8-10).

We can’t win the battle on our own, but the Lord is our Fortress!

When a word occurs only once in the New Testament, you can look elsewhere.  The Septuagint, the Greek Old Testament translated about 200 BC, is an excellent place to check.  It’s also useful to check secular Greek literature.  To get this information, you have to consult one of the lexicons.  In this case, you can get some help from Blue Letter Bible (blueletterbible.org) which provides an entry from Thayer’s Lexicon, a standard Greek dictionary

Q – I just heard someone teach on the Lord’s Prayer and he said that “Give us this day our daily bread” is really a reference to Jesus as the Bread of Life.  I have always thought that it referred to our daily needs.  Do I need to change my view?

A – The Greek word for “daily” is epiousion, a word which is used only in this prayer.  Some of the early church fathers wondered if Jesus coined the word for this occasion.  The most likely idea is “bread sufficient for this day.”  Personally, I don’t see any reason to stop praying for daily needs.  Jesus encouraged his hearers to trust God for daily food later in the same chapter (Matthew 6:31-34).  Jesus did speak about Himself figuratively as the Bread of Life in John 6:35, but He was rebuking the crowd who were ignoring His spiritual message and only looking for a repeat of the miraculous feeding of the 5000.

The New Testament talks a lot about servants, and we talk a lot about “servant leadership.”  A look at the main Greek words for servant will help us set our priorities properly.