“Kick the Bucket” and Other Odd Phrases

“Kick the Bucket” and Other Odd Phrases

We know love by this, that He laid down His life for us; and we ought to lay down our lives for the brethren.

My mother used to say, “Aunt Ida kicked the bucket.”  An immigrant from Kazakhstan might wonder, “Why would Aunt Ida do such a thing?”  But our family knew what Mom meant:  Aunt Ida had died.

Our language is full of phrases that mean something much different than the dictionary definitions of the individual words would suggest. 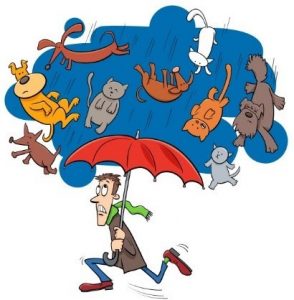 These phrases are idioms, a fascinating feature of our language.  An idiom is a phrase with a meaning that differs from what you would expect by looking at the dictionary meanings of the individual words.

Idioms make our language more colorful, but they can also be confusing.

The Greek language also uses many idioms, and we can avoid much misunderstanding by realizing that they exist.

We can appreciate the power of idioms when we read a verse like 1 John 3:16. The Greek uses words that we would normally translate “put/place the soul..”  That isn’t very meaningful in English, but the meaning was clear.  It is the equivalent of “lay down your life,” a reference to a sacrificial death or at least an unselfish dedication to another person.

There is even a Greek idiom that is linked with the climax of the great Story of God’s plan for the universe.  Whenever you see the English “forever,” you can be sure that the Greek phrase behind it is literally “into the ages.”  “Forever and ever” is the English version of the Greek idiom “into the ages of the ages.”  It’s a wonderful way to visualize eternity as something that goes into the time tunnel that stretches for ages of ages into the future.

How appropriate to find this at the great Hallelujah Chorus in Revelation: ‘The kingdom of the world has become the kingdom of our Lord, and of His Christ, and He will reign into the ages of the ages” (Revelation 11:15)

In many cases, you won’t notice a Greek idiom because the translators of your English Bible have already provided an English translation that gives you the basic idea.  If you have a study Bible, you might see a note attached to the verse that gives the word-by-word translation. I think you get the maximum benefit by knowing both the individual words and the meaning of the phrase as a whole.

If you encounter a phrase that doesn’t seem to make sense, consider the possibility that it might be one of these idioms.

Q – In Hebrews 6:6, the adverb “again” is sandwiched between “fallen away” and “renew” in the Greek word order.  How does one decide which verb it modifies?

A – This is a grammar question, and it brings up a good point.  When you’re working with nouns, adjectives and participles, the words come with a variety of endings that you can match up.  In that way, you can tell which words are connected.  Adverbs, however, don’t have different endings.  Thus you have to look at the context and use your common sense to tell where it connects to the rest of the sentence.  Grammatically, either of the options you suggest are possible.  You’ll have to decide which idea makes the most sense.  As you suggested, your theology might lead to lean one way or another, but you should try to approach this with an open mind.

One of the big words in the Bible is covenant.  It’s possible to trace the whole path of God’s dealings with the human race by looking the covenants He has made.  Next week we will become better acquainted with the New Testament concept of a covenant.