I, therefore, the prisoner of the Lord, entreat you to walk in a manner worthy of the calling with which you have been called.

When the apostle Paul wanted to wrap up the whole Christian life in a single phrase, here’s what he chose: “Walk in a manner worthy of your calling.”

If I take my Christian life seriously, I will want to know exactly what it means to live in a “worthy” way.  Fortunately, the Greek word Paul chose comes with a vivid mental picture attached.

The Greek axiōs (ahk-see’-ohs) occurs 6 times in the New Testament and is usually translated “in a manner worthy of” or (in the King James) “worthily.”  The matching adjective axios (ahk’-see-ahs) appears 41 times.

Whenever I encounter these words, I immediately imagine a set of scales.  Ancient scales consisted of two pans hanging from a balance beam.  To measure out one pound of wheat, you would put a one pound metal weight on one pan.  Then you would pile wheat onto the other pan until the two pans hung level. 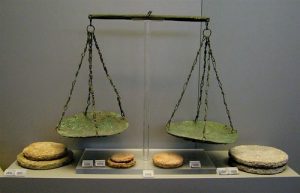 In classical Greek, axiōs was used to describe two things of equal weight or value.  Literally or figuratively, the thing or person would match up to a standard.  The scales would balance out.

You can see this concept used in many ways in the New Testament:

A Roman centurion considered himself unworthy to demand a personal visit from Jesus (Luke 7:7).  In the officer’s mind, his own problems weren’t weighty enough to distract the Messiah from His main ministry.

Paul declared that elders who rule well are worthy of double honor (1 Timothy 5:17).  The honor they receive should be equal to their faithfulness.

The prodigal son confessed that he was not worthy to be called a son (Luke 15:21).  Match his behavior with his privileged position in the family and the scales would tip the wrong way!

The throngs around the throne of God in Revelation worshipped the Lamb who was the only one worthy to open the seals of the book that would unleash God’s judgments (Revelation 5:9, 12).  No one else in the universe could measure up to that task.

Everywhere that axiōs appears, we get the picture of a divine scale.  Something wonderful is on one side of the scale and we have to ask, “Does our behavior match up?”

Return to Ephesians 4:1 with me.  Paul has just spent three chapters explaining the marvelous gift of salvation that God has provided.  He has detailed all the ways in which the Lord has called us to become members of His family, His church.  All of that divine grace is piled on one side of the balance beam.  Now, he says, aim to live in a manner that matches the weight of God and His gift of salvation!

Even our best efforts can never match God’s great goodness, of course.  That’s why we are saved by grace, not by our good works.  Christ has put His thumb on the scale, placing His righteousness on our side.  That’s why we serve Him in love and gratitude.

My family was in Austria at the end of a rigorous month of short-term ministry and we received the gift of a stay at Rosenhof, a chalet on the border of Switzerland that specialized in providing a rest stop for missionaries, particularly those going behind the Iron Curtain.  One of the ladies who changed the sheets shared the reason for the unutterable sense of peace that pervaded the place.  “When we prepare the room, we try to do it as though the Lord Jesus was going to be the guest who stayed here that night.”  A great motto for ministry!

There is also a verb in this word group:  axioō (7 times) which means “to be worthy.”  A complete study of this concept would include all three words:  verb, adjective and adverb.

Note that this word study goes back to the early use of the word to describe a literal set of scales.  It was most commonly used in a figurative sense, and all the New Testament passages employ it in a general sense to show that one thing measures up to another, greater thing.  People were not always thinking of a scale when they used the word, but that imagery did exist in the background, and it offers us a useful word picture to understand the underlying concept.

Q:  When Satan tempted Jesus in the wilderness, were the temptations based on the idea that he was questioning Christ’s identity as the Son of God?

Satan knew it would make no sense to deny the Sonhood of Jesus. The temptations were all attempts to persuade Jesus to act independently of His Father, to follow the example of Satan and make His own choices in disregard of the divine plan.

Palm Sunday is here, and there is no better time to look at the meaning of “Hosanna,” the word shouted by the crowds as Jesus entered Jerusalem.  It’s not a Greek word at all, but it links us directly to an Old Testament prophecy of that event.