Asotia: A Bag with Holes

Asōtia: A Bag with Holes

And be not drunk with wine, wherein is excess; but be filled with the Spirit.

It hurts to realize that the bag of coins you’ve been carrying has holes.  The cash has been dribbling onto the ground and you didn’t even notice that it was gone!

That’s what life was like for the prodigal son in Luke 15.  Holding his share of his father’s estate, he hurried off to enjoy himself.  Everything went well until he ran out of cash and all his friends ran out on him.  He couldn’t even tell you how it disappeared so quickly.

We read about lottery winners who run through millions of dollars in a few months, and we think, “How foolish!”  But most of us have to admit that we have looked at our checkbook and wondered where the last paycheck went.

The Bible has a word for the prodigal’s experience.  The King James Version says he wasted his resources in “riotous living” (Luke 15:13).  The Greek word for “riotous” is the adverb version of asōtia, often translated as “dissipation” or “debauchery.”  The word occurs three times in the New Testament, each verse opening up the danger of this potentially disastrous pattern of life.

Peter reminds his readers that they used to lead a lifestyle that he describes as asōtia.  Verse 3 catalogs the featured behaviors: sensuality, lusts, drunkenness, carousals, drinking parties and abominable idolatries.  Their old lives were so steeped in the partying culture that their old buddies couldn’t believe they had abandoned it for a new religion.

Asōtia is more than merely an occasional misstep; it is a headlong plunge into the immoral practices of a pagan culture.

It is so serious that a man could be disqualified for leadership in the church if his children were out of control or addicted to asōtia.  The word originally included the idea of “incurable, incorrigible” – someone who could not be corrected.

Asōtia not only debases the individual, it reflects on his family.

No wonder Paul links drunkenness to the degenerate life of asōtia.  Alcohol abuse is a gateway to a world of out-of-control revelry.  It is precisely the opposite of the righteous, joyous life of a Christian.

There is one more fact about this Greek word that helps explain why it is so serious.  The Greeks constructed asōtia by adding “a” to the word “sōzō (“save”).  Adding “a’ to a word negates it, just as an “atheist” is the opposite of a “theist” (a believer in God).  As one commentator expresses it, asōtia means “unsavingness.”

It is the trait that allows life to slip between your fingers.  It wastes whatever it touches:

In contrast, when the Holy Spirit controls a person, nothing is wasted.  Christ calls us to be good stewards of all that He has given us, so we cannot afford to put it in a bag of holes!

The last insight about asōtia is based on the etymology, or history, of the word.  A good student will use etymology cautiously, because the meaning of a word could have shifted in the centuries of us.  The actual usage in the first century is more important than the way it was used 400 years earlier.  However, I believe we get an accurate picture when we include the idea of “not saving” in our picture of this word.

Q – I am studying the armor of a Christian in Ephesians 6 and I see that the Greek word for “sword” is machairos.  I understand that there is another word for sword, romphaia.  Can you tell me about the difference between the two words?

A – The machairos was the standard weapon used by Roman infantrymen.  It was straight and relatively short (about 18 inches) with a sharp point and sharpened edges on both sides.  You could use the edges of the blade to chop at an opponent, but the most effective tactic was to thrust the point into an open spot, plunging it deep into the enemy and inflicting a fatal wound.  Peter used a version of a machairos in John 18:10 to slice an ear off a servant of the high priest, perhaps an indication that Peter was an amateur in the use of a sword.

A romphaia was a longer sword, sometimes curved.  It might require two hands to slash at an enemy in a sweeping stroke.  The New Testament mentions it only in Luke 2:35 and in six passages in Revelation, mostly describing the sword that Christ uses to demolish His foes. 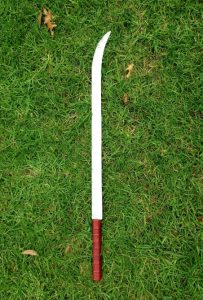 One of the distinguishing marks of the early church was their unity of spirit.  Next week we will look at a Greek word that sums up the secret of their staying power in the face of immense obstacles.

PrevPrevious ArticlePais and Teknon: Being a Child of God
Next ArticleHomothumadon: How to Come TogetherNext